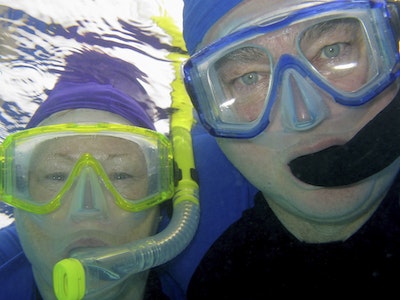 GEDA-pix produces visual narratives that combine art and science with unique images from the Americas, Europe, Australia, New Zealand, and oceanic island realms of the Caribbean and tropical Pacific. We also co-edit The Photographer's Frame, a regular feature of visual essays in Parks Stewardship Forum, a free, open-access interdisciplinary journal for place-based conservation from the University of California, Berkeley's Institute for Parks, People, and Biodiversity escholarship.org › psfParks Stewardship Forum - eScholarship.org.

Dorothy Ann and Gary E. Davis established GEDA-pix as an extension of their environmental and travel consultancy to better connect people to nature and other cultures and to appreciate the diversity of interesting travel opportunities available. GEDA-pix produces high-quality images to inspire people to care for nature and other people. We provide a secure and easy-to-use online store for purchasing professional print and digital products that you may treasure forever.

Visit the portfolio for examples of our work or contact us to discuss your interests and let us show you how we can meet your needs.

Gary E. Davis has studied nature and people since the 1960s as a scientist, aquanaut, national park ranger and photographer. He has explored California's giant kelp forests, Florida's Everglades and tropical estuaries, coral reefs and ocean depths in the Florida Keys, Virgin Islands, and the Bahamas. During 40+ years of scientific research in national parks, he realized that translating his science into clear visual narratives was as important as the discoveries themselves. He now shares his enthusiasm for life with visual narratives and image galleries to better connect people to nature. Trained as a marine ecologist and a fisheries scientist in the 1960s, he pioneered studies of spiny lobsters, abalone, and other key species as ‘vital signs’ of ocean health that improved conservation. In the 1980s, he developed prototype ecological health monitoring protocols to give early warnings of crises, design remediation, and guide ecosystem stewardship in Channel Islands National Park, California. He then helped expand these protocols to the U. S. National Park System in the 1990s. His research showed how un-fished marine reserves could simultaneously improve local fishing and ocean health in Dry Tortugas, Everglades, Biscayne, and Channel Islands national parks. Gary held a variety of research and management positions with the U. S. National Park Service and U. S. Geological Survey. He was a founding board member of the SeaDoc Society at the University of California, Davis, Wildlife Health Center, and served on the board of the Western National Parks Association. He also advised the U. S. Department of the Interior as a member of the National Park System Advisory Board's Science Committee. He hopes you enjoy the stories of people and nature in his images.

Dorothy Ann Davis was enamored with the wonder of photography when, as a child, she watched her mother develop pictures in a small home darkroom and discovered the magic of the emerging images.  She developed and applied her own photographic style during a 30-year career as a teacher of English literature, art history and French language and culture. She traveled extensively to investigate cultures she then shared with her students. She used her photographs to share “the power of place” and to spark in her students a desire for lifelong learning through their own experiences. Dorothy has literally flown around the world, visiting six continents and accumulating cultural experiences and images that she shares enthusiastically with others. She is awed by the influential power of images and amazed at the beauty and the cultures of the world in which we live. Through her photographs, Dorothy aspires to share the stories of the people and places living in the images.

Together, Gary and Dorothy are proud to support the National Geographic Society as Charter Contributing Members, and to further its mission to inspire people to care about the planet. In 2016, The Wall Street Journal selected "A Thinking Person's Guide to America's National Parks" as one of the six best books of the year, noting "...the often breathtaking photographs." GEDApix provided the book's main cover image and 30 photos illustrating 24 essays about national parks and society. Check the National Parks Gallery for those and other park photos.